I remember being a somewhat insensitive adolescent male – well, insensitive and confused, actually. I mean, why did some women object to traditional roles, and why did they reject pursuing what I had been taught they had always pursued? Why wouldn’t they want men to regard them as beautiful and attractive? Of course, who gets to decide what is beautiful or attractive and the purpose that this serves? Although this was and is a complex, nuanced area of debate, I see now that many of the objections were against being defined by the expectations and desires of men. Let me say as a man that these are not always bad, but I know also that they are certainly not always good.

I’m afraid the title of this post might promise more than it can possibly deliver. Let me concentrate on an irony. In the 1960s and 1970s, I heard arguments that women should not be placed on pedestals and treated as goddesses because this created impossible expectations and societal pressures which they could not hope to satisfy. Oddly enough, such unrealistic standards also have a tendency to sell real women short by ignoring  many other facets of their skills and personalities.

Perhaps due to my age, I am struck by the contrast between then and now. While it is true that many women felt empowered by strong female characters from various works of fantasy during the time in question, it seems to me that this approval is much more prominent at present. I’ve even read at least one allegedly feminist post on the virtue of the goddess mentality. Why might this be? Perhaps it reflects the fact that the need to improve the ways in which women are regarded and treated is ongoing and that people who feel disadvantaged or mistreated may be prone to seeking exaggerated examples of equality or even superiority.

With all the emphasis that feminism receives in current society, this raises some interesting questions.  Does feminism meet the needs of women, or does it leave them isolated and even more vulnerable to male exploitation by stripping away conventional protections? Then again, what does “feminism” actually mean? There are a number of definitions out there, and the version to which one subscribes is of importance when considering the previous question. 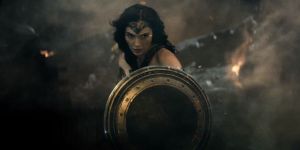 Okay, now I’ve done it. I was originally going to make this one post, but I have the distinct impression of choking on more than I can swallow. Before I bring down on my head the wrath of over 50 percent of the human race, please allow me to defer continuing this discussion until next week. Don’t excoriate me yet. Trust me – I’m a man.