When reviewing Guardians of the Galaxy Vol. 2 (2017, Disney Marvel), I suppose one must mention Baby Groot, voiced by Vin Diesel.  From the opening to the closing credits, he adds an emotional,  humorous, and heroic facet to the story.

In addition to some of the personnel mentioned last week, some new cast members join the party: Kurt Russell as Ego, Pom Klementief as Mantis, Sylvester Stallone As Stakar Ogord (the head Ravager who reveals some of Yondu’s backstory), and Elizabeth Debecki as Ayesha (a ranking member of the snobbish Sovereign).

This entertaining and somewhat adolescent movie (no offense intended from one who regards himself an overgrown teenager) employs a number of themes from ancient mythology: patricide, the seduction (or worse) of women by gods, and gods as planets. My unanswered question about Peter Quill’s father is addressed early on. He was sired by Ego, a Celestial (or god, “small ‘g’, son”) whose powerful but self-absorbed mind has generated his physical form and the planet he calls home.

The planet itself is alive, a concept from Greco Roman mythology. I was reminded of Plato’s Timmaeus. Humans and gods were considered animals because they moved (i.e. were animated), and this applied to planets as well, which were often associated with various gods. The surface of Ego’s planet is a kind of Candy Land on hallucinatory steroids (my invented term).

I liked how Ego’s planet is, at one point, shown as having a face when viewed from outer space.

It’s elaborate interior is likened to a nervous system emanating from Ego’s brain.

Mantis is Ego’s fearful assistant. She identifies herself as an Empath, an alien who can detect emotions through physical contact with the person feeling them.

The story has a persistent theme of reconciliation – for example, between sisters Gamora and Nebula…

… and between Quill and Yondu (as well as between Yondu and the Ravagers).

In an outro mingled with the closing credits, Ayesha…

…  reveals the technological chrysalis that will usher Adam Warlock into the MCU.

In the comics, Adam is repeatedly killed and resurrected, so his cinematic inclusion should be of mythological interest. Another outro (as well as a screen shot) provides a humorous scene of Stan Lee telling stories to the Watchers.

His own creation, they are observers who show up at events of cosmic importance in the comics. Given the rate at which these movies are being made, Marvel Studios should never run out of characters.

Last week, I mentioned two departures from the norm in the Marvel Cinematic Universe. The first I reviewed is Doctor Strange. The second is actually two movies, so far. The first (as if you couldn’t tell from the above picture) is…

Let’s get this out of the way first. Guardians of the Galaxy (2014, Disney Marvel Studios, directed by James Gunn) has an extensive ensemble cast: Chris Pratt as Peter Quill (Starlord), Zoe Saldana as Gamora, Dave Bautista as Drax, Vin Diesel as the voice of Groot, Bradley Cooper as the voice of Rocket, Michael Rooker as Yondu Udanta, an unrecognizableKaren Gillan as Nebula, John C. Reilly as Corpsman Dey, Glenn Close as Nova Prime, Benicio Del Toro as The Collector, Djimon Hounsou as Korath, Lee Pace as Ronan, and Josh Brolin as the voice of Thanos. There are more, but I’m getting tired. Much could be said about the plot, characters, acting, soundtrack, and special effects of this very entertaining movie. I’m choosing instead to focus on the cosmic and mythological aspects of its well-scripted story.

This is the first movie which offers more information on Thanos, a multidimensional character invented by writer Jim Starlin for Marvel Comics. He has otherwise been seen only in outro sequences for Avengers and Avengers: Age of Ultron. A little of his backstory is provided in this movie. If the MCU does any justice to this character, he will prove a good psychological and mystical study. I look forward to seeing more of him.

Of course, Thanos and several others are after an artifact which turns out to be an Infinity Stone.

Benicio Del Toro does a good turn as The Collector. I enjoyed the sequence where he explains the history of the Infinity Stones. This scene infuses the MCU with an interesting cosmology.

One of my unanswered questions was the lineage of Peter Quill. His mother was an earthling, but the exceptional identity of his father is not revealed in this first movie. It hints at a mythological nature which enables him to hold onto the Infinity Stone for as long as he does without being destroyed.

I think it appropriate to mention Groot in this context as well. Despite his violent capabilities, he is a benevolent creature who looks out for his friends and ultimately sacrifices himself for them. Like many Marvel characters, though, he isn’t really dead. The comics as well as the movies of Marvel utilize a number of resurrection themes. I attribute this more to an economic need to provide suspense and to bring characters back for future installments than to any religious motivation, but I still appreciate the additional depth it provides when done properly. 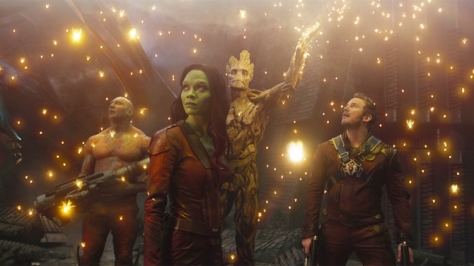 Surf in again next week. There will be plenty more to follow…