He is the god of thunder, lightning, and strength, etc. Odin and Freya are his parents. His attributes make for some impressive imagery. As examples, consider the following paintings.

Thor is only one of the Norse gods which Marvel Comics has borrowed. He first landed in August of 1962.

As is often the case, the artwork grew more sophisticated over the years. I must confess, however, that I have developed a real appreciation and enjoyment of the artwork of the Silver Age of Comics. It is the style I grew up with.

How can I resist showing this representation by Alex Ross? 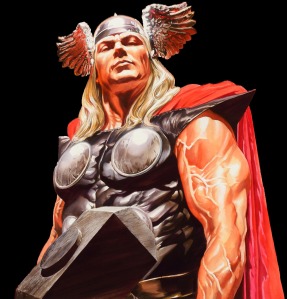 The Disney Marvel franchise has produced some interesting refinements for application to the big screen. In so doing, they have produced some truly iconic imagery for their characters, including Thor (played by Chris Hemsworth). Some fans have complained that the movies have changed the way that these characters are drawn and described in the comics. One additional thing that I like about the Thor movies I have seen is how they mix Norse mythology with science fiction.

One of my favorite visual sequences was of Thor summoning lightning from atop the Chrysler Building in New York during the great battle with alien invaders in the first Avengers movie. That’s all for now. Next time, another week, another god.